Mountain shoes, water and a hat are needed if the day is forecast to be sunny, to go up to the Montgrí Castle.

Visible from many points of the Empordà and settled on a rocky mountain that is not many kilometers from the Costa Brava sea.

Taking advantage of the fact that we are close to it, we can go to the hermitage of Santa Caterina, another emblematic building within the Torroella de Mongrí district.

In Torroella de Montgrí, we start the walk. Going on foot is the only way to go up to the castle. It is not a difficult excursion, it is suitable for anyone who is worth their own and also has no loss. The timing will depend on the time you enjoy the view from the castle towers and looking at the landscape, or in Santa Caterina hermitage, but calculate just over two hours. 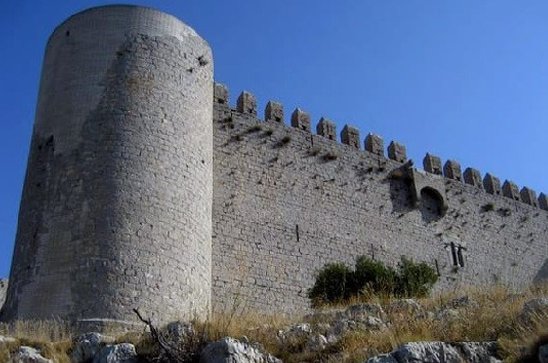 We must follow the red and white milestones in parallel. In the first section, the path is simple and wide. When we turn, we can already see the Empordà landscape with the Ter crossing it when the river heads its last section, and the unfinished bell tower of Sant Genís church. The Sant Genís church majesty shows the importance the town have had centuries ago; the church is sober but with a forceful aspect, leaving all of it as elevated above the houses. Construction began in 1306 on top of an existing one, and it was consecrated three centuries later, in 1609.

With this look at the church from far away we have not stopped talking about the mountain in which we find ourselves, since the stone to raise the temple was extracted from Montgrí mountain.

Keep walking and soon we realize that we are on a pilgrimage path. A chapel awaits us on the horizon, it is made of stone and has a vaulted ceiling. This little chapel, like its two “twins” that we will find a few meters away, were built on the occasion of devotion to Santa Caterina.

They were also used as a refuge by herd herders. From this chapel the path begins to climb more and with pointed and poorly placed stones. Right away we find the second chapel, and we already see the third one right there.

The landscapes are beginning to be sensational.

Once in front of the Montgrí castle and through its door, we may be disappointed to see the interior is empty. The castle was simply never completed. The reason for the construction was the conflict between the counts of Empúries and Barcelona; when the county of Empúries was annexed to the Crown, the castle lost all utility and the works were suspended.

A few years ago, an important rehabilitation was carried out and, among others, a spiral staircase was made and allows you to climb to the top of the castle, strolling between the four cylindrical towers. From up here the panoramic is amazing. The Medes islands, the Roses bay, Cap de Creus, the Empordà plain, different surrounding towns, the end of Ter river, the Canigó mountain…