Peratallada is located in Girona area, halfway between Barcelona and the French border, in the heart of Empordà and a few kilometers from the Costa Brava.

Apart from its architectural and historical buildings, the city is recognized for its important artisanal and above all gastronomic offer. The alleys inside are full of all kind of suggestive restaurants, which offer the ideal complement to the town visit.

The town still preserves its medieval urban distribution. From Les Voltes square, with its unique porches, to the narrow alleys, where you can discover an interesting set of popular architecture. On older walls, houses characteristic of the 16th centuries are still kept. The traditional house in Peratallada usually has the lower floors covered with stone vaults, destined for warehouses and cellars, while the upper floor is dedicated to the interior.

The place name Petra Scissa or Carved Petra is apparently documented from the 10th century.

The church of San Esteban

On the building facade, the doorway stands out, with a semicircular arch, supported by moldings, the simple rose window and three corbels that perhaps supported beams from a disappeared big door. The Romanesque work has undergone several late alterations, which is evident especially in the interior.

Currently the interior of the building is not open to visitors.

Is located on top of a huge piece of natural rock, artificially cut to give it verticality.

The schematic plan of the castle corresponds to the type of fortress from the high-medieval period, very common in Carolingian times. However, the existing architectural structure today is the result of later reconstructions. Romanesque work (XI-XII century) can be considered as a good part of the walled enclosure, which still shows subsequent reforms.

The remains of the old town, prior to the remaining medieval buildings, are traced to the fortified nucleus, but also at its feet: the rear courtyard of the palace and below them. There are a great profusion of cavities and grooves carved in the rock of the ground. 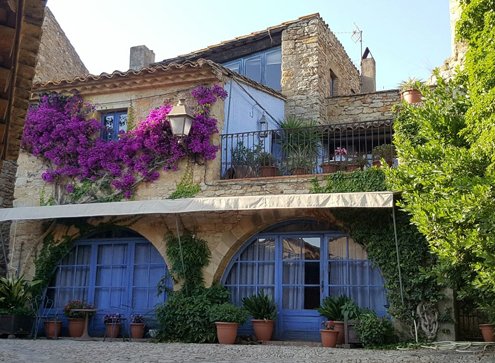