Located in the heart of Costa Brava, the Empordà Golf have 36 holes in play, distributed over 3 18-hole courses: Links, Forest and Top10 PGA – Von Hagge.

At Empordà Golf, Robert Von Hagge managed to improve the already fantastic environment by posing a technically perfect course with a wide variety of strokes and techniques to use.

Know that it is located in an area where there are 10 golf courses distributed in 8 clubs of a very good level, only 35 kilometers away, among which stands out, together with Empordà Golf, PGA golf of Catalonia aspiring to host Ryder 2022 with the support from all other fields in the area. 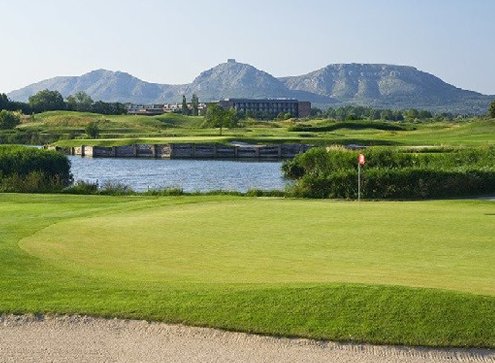 The first golf course on the Costa Brava, located in Arenales de Mar, on some dunes covered by an immense pine grove planted seventy years ago, Golf Playa de Pals was designed in the early 1960s by Baltasar Parera Vilar and his wife, Rosa Coll Llach, who provided all the necessary land, as well as the construction of the first nine holes, the social premises and all the initial maintenance machinery.

The works began in 1964, under the project and direction of the English architect Fred Hawtree, who from the beginning acted in perfect harmony with the wishes of the Parera-Coll.

In summer 1966, the initial nine holes of the first golf course on the Costa Brava were inaugurated, and shortly thereafter, in 1968, the expansion was started with nine more holes to reach the eighteen regulations, which were opened in 1970, with International Amateur Championship of Spain celebration.

Since then, it is considered one of the best golf courses in Spain, thanks to the care in design and construction, and it has hosted numerous international competitions.

The 18-hole Par3 Pitch & Putt Gualta course, with its bunkers, lakes and wide greens, is a delight for fans, as well as a challenge for players of all levels of the sport.

The main advantage it offers to beginners is the fact that the Pitch & Putt handicap is not compulsory, and therefore they can enter the field after having learned a few lessons.

The course is a pleasure for the more advanced players, as well as an excellent opportunity for the elderly and children, since the time it takes to do the 18 holes is just over two hours.

Finally, experienced golfers can also find an excellent place to practice on the course, since the course allows them to practice their shorter game, often less attended.

They also make available to all visitors a well-kept and complete practice area, consisting of a 250-meter driving range, an approach area and a putting green, where you can perfect your shots.