Gateway to Greek and Roman culture in the Iberian Peninsula, Empúries is an exceptional site, where the remains of a Greek city, the colonial enclave of Emporion, coexist with those of a Roman city, the ancient Emporiae, created at the beginning of the 1st century BC on the structures of an ancient Roman military camp.

Empúries site is located in L’Escala, facing the sea, south of Roses bay, and has been classified by UNESCO as one of the most beautiful in the world. During the visit you will be able to step on the streets of the Greek and Roman ancient cities, delight in the mosaics that decorated the houses floors or make a wish to the god Esculapius, who watched over the health of the Emporitans.

A small museum displays a selection of the objects found during the excavations, witnesses to life in the city: children’s toys, jewellery and personal and household items, paintings …

New treasures are excavated every day and come to light helping to build the historical account.

The remains that are seen have approximately 2000 years of history. 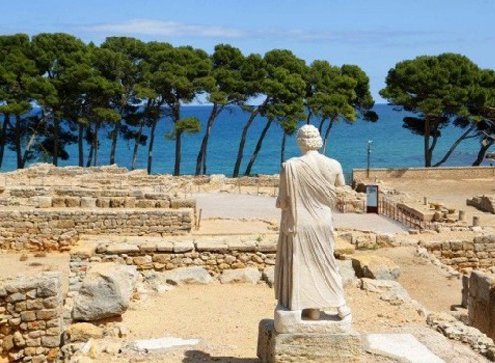 During the first half of the 6th century BC, Greek merchants from Focea established on a small promontory strategically located at the southern end of Roses bay, the Palaia Polis.

A promontory, already occupied since the final bronze and the first iron age by an indigenous population that had maintained contacts with the Phoenician trade.

A short time after the Greek settlement at the Palaia Polis, the Emporitans created a new urban nucleus immediately on the natural bay south, guaranteeing control of the sea port facilities.

The Greek city of Emporion, with the nucleus of the Palaia Polis and the Neapolis, developed its urban activity from the 6th century BC to the Roman presence in 218 BC, when the Emporitan port is used as an entry point to the peninsula for Roman troops in their fight against the Carthaginian army.

In 195 BC, Marco Porcio Catón installed a military camp in Empúries that was the birth of a new city, in the early 1st century BC. In Emperor Augustus times, the Greek and Roman cities were physically and legally united under the name of Municipium Emporiae.

While Gerunda (Girona), Barcino (Barcelona), Tarraco (Tarragona) became increasingly important, Emporiae gradually lost it. In the second half of the 3rd century AD, the entire Roman city and the Neapolis sector were already abandoned, and the population was concentrated in San Martí d’Empuries. This city was the episcopal seat during all the Late Antiquity and its inhabitants used as cemetery the northern area of ​​the Neapolis, where were find the remains of a funeral chapel.

After the Arab invasion and the Frank recovery (8th century), Empúries was the capital of the Carolingian county until the 11th century, when the count moved the capital to Castelló. At that moment, Empúries became a small nucleus of fishermen who founded the city of L’Escala in the 16th century.